After spending less than two days in Palawan’s capital, Puerto Princesa, it was time for us to go to El Nido, where we’d spending most of our 2 weeks holiday. El Nido is a small coastal town on the Northern tip of Palawan which is most famous for the limestone cliff islands scattered all over the area. From what was only rich people’s playground in the past with luxury resorts found on some of the most scenic islands on Earth, El Nido town on the mainland has seen a dramatic increase in the arrival of backpackers and budget travelers alike in the recent years.

Island Hopping is one of the main draws of the area. The town is small and crowded, and the mainland beaches are few. To truly enjoy the jaw-dropping natural beauty of the area, island hopping is a must. There are 4 tours available in El Nido and they are simply called A, B, C and D. On the day after we reached to El Nido, we decided to go for Tour C, as it’s the best one for snorkeling. Our guesthouse arranged the tour of us which was set to start from 9 in the morning until about 4 in the afternoon.

We were picked up by a tricycle (known as trike), the equivalent of Tuk-Tuk in other Asian countries, to go to the main El Nido beach on the morning from where all the tour boats started. As we had our first view of El Nido beach, we couldn’t stop exclaiming ‘Wow’s and ‘So pretty!’s as the sight of blue sea pinned with green limestone cliffs  was truly impressive. Most group tour boats are organized on a traditional banca boat that are used throughout Philippines.

As we embarked on our island hopping tour, I began to understand why El Nido is said to be so beautiful. The scenery of the small green islands on the sea was truly a sight.

This was our first stop on the tour. The island is called so because it has the shape of a helicopter when seen from a distance.

The main highlight of this island is snorkeling. The sea was not as calm as you’d find in Southern Europe, but it still allowed you to snorkel and swim relatively calmly. There were other tour boats already docked in the area as we pulled up in the dazzling blue waters at its shore. The reef was so pure and vibrant that I was awed!

My boyfriend even spotted a squid on the area while snorkeling, but I didn’t. I’d recommend snorkeling on the left side of the island (as you go to the island), as I found the reef there to be even more impressive than the more famous snorkeling area on the right side.

Our next stop was Hidden Beach. As the name suggests, we couldn’t actually see the beach from open sea. Our boat stopped near the numerous limestone rocks, and we had to swim our way into the beach that was surrounded by high cliffs.

Once you reach the beach, you will how special it is: it is a small beach with knee-deep, clear water pool. As it was a partly cloudy day, at the time we visited the Hidden Beach, sun was hidden among the clouds, so the blues of the small pool didn’t show as much. The whole time I was lost wondering of the magic the place must be when not swamped by 10 tour boats full of tourists at the  same time.

I recommend a private island hopping tour to anybody who can afford it in El Nido! 🙂 The tour stops truly come alive especially when you get the pleasure of being on them without 50 other people.

As our boat sailed towards our next stop, Matinloc Island, the sun appeared again and I was completely humbled by such a beautiful natural scenery all around me. Sunny weather can really make a big difference when you visit places like these.

On this island, we were going to have our buffet lunch, which is included in all island hopping tour packages. The water near the beach was stunningly blue and clear! As a matter of fact, I spent the whole 2 hours of stop here sitting at the boat looking at the water below and swimming. Something funny happened here as my boyfriend spotted what we thought were sea snakes.

I was petrified so I didn’t jump off the boat into the water. Apparently there were many ‘sea snakes’ just hanging out at the bottom on what otherwise looked like such inviting, beautiful waters. I asked our tour guide and showed him the creatures (the water was very clear) from the boat and he said they were sea cucumbers. Anyhow they looked kinda creepy so I didn’t go anywhere near them.

After having delicious lunch and freaking out over the sea s̶n̶a̶k̶e̶s̶ cucumbers, we were off to the next stop. The whole experience to me as I recall and write about it seems unreal because I had never seen anything that strikingly beautiful before. The next stop was just on the water near some cliffs where we’d snorkel. 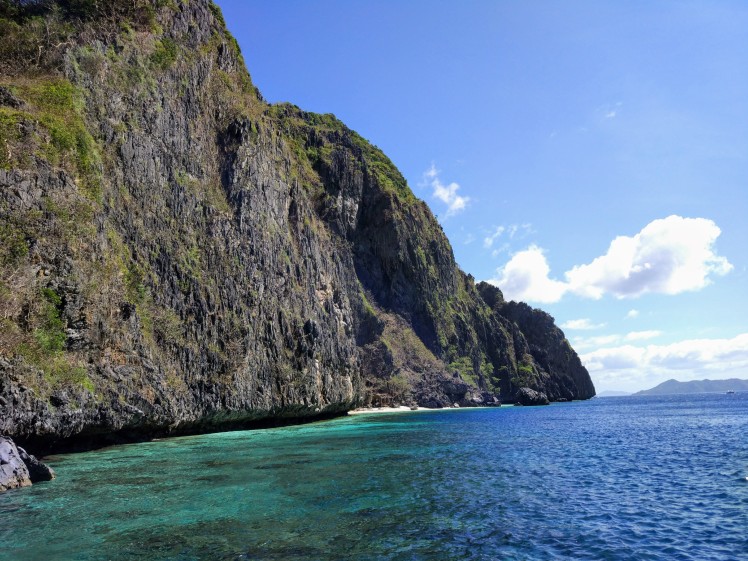 One of my favorite things about this island was a tiny, most beautiful strip of sand (you could call it a mega-mini beach), where I swam to and spent half an hour just looking at the incredible surroundings.

The reef was top-notch too, it was probably the best snorkeling spot on the whole tour. We saw some sea turtles from the boat, as they were swimming on the surface, but we didn’t see any when snorkeling. 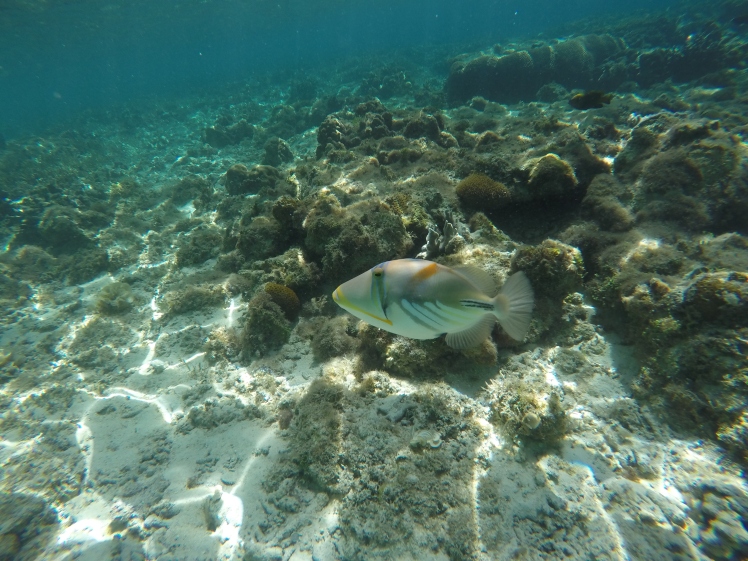 The last stop on our tour, we had to swim our way through a small hole among the rocks to reach the beach. The tour guide showed us the way as we carefully swam through the whole that led to the secret beach. Just like the hidden beach that we saw earlier on the tour, it was a small, perfect beach tucked away from the realities of everyday life 😉 We also enjoyed the snorkeling near the exit, and my boyfriend discovered another opening between rocks under the water. But we didn’t dare swim through it 😀

With those five gorgeous stops, we were brought back to El Nido on mainland. I loved this tour and it was probably my favorite among the ones we did eventually (A, B and C). Tour C is one of the most popular island hopping tours in El Nido and it’s a must for people who love the underwater world.