In May this year, I spent almost a week exploring the beaches of Sithonia in Halkidiki peninsula, northern Greece, alone.  Halkidiki is a peninsula that has three peninsulas or fingers, namely Kassandra, Sithonia and Mt. Athos. Halkidiki is easily accessible from Thessaloniki, an important, gorgeous waterfront city in northern Greece. It is a popular summer destination for both Greeks, mostly from Thessaloniki and other Europeans. My sole purpose was to go to the beaches, so I headed straight for a village called Metamorfosi  after landing in Thessaloniki airport.  It was a little confusing to get to the right bus station at first, but a friendly young woman went out of her way to lead me to the right bus stop in Thessalonki center upon reazling my confusion.

On the bus going to Sithonia, or the second peninsula of Halkidiki, I made smalls talks with a fellow passenger who also helped me get out at the correct bus stop. When traveling solo, people are more likely to have contact with the locals, so my experience in Halkidiki only strengthened my positive impressions of Greek people. After arriving in Metamorfosi, I was greeted with a warm welcome by the host of my rented apartment that was set among a big garden of roses and olive trees.  I started evaluating my options to get around, and I decided to use the public bus that ran thrice a day connecting different villages of the peninsula. It limited my options and I couldn’t see everything I wanted to, but I thought that renting a car and driving on an unfamiliar terrain wasn’t a great option for me. The advantages of using the bus were that it was a far cheaper way and I could enjoy the scenery without having to worry about maps, directions and driving.

One of the quieter villages in Sithonia, Meramorfosi was my base for the week-long stay. I didn’t really have to go farther to find beautiful beaches, as a long stretch of beach flanked by thick pine vegetation was just five minutes walk from my apartment.

There were almost no people on the beach every time I went, as the water was cold. So, I spent time walking along the pebbly empty beach and playing with my camera. Metamorfosi is known for its pine and olive trees, and is a good destination for people who enjoy nature and serenity.

I found the village center to be charming too. There were a decent number of tavernas and shops available, and it didn’t feel too crowded. But that’s probably very different in July and August.

Sarti was the last stop of the local bus running on the peninsula, and the bus went around the peninsula stopping at different towns and villages along the way. The route consisted of both coastal and mountain views. It was great to observe all the gorgeous and sometimes dramatic scenery, and I didn’t mind the long detour around the peninsula at all.

I didn’t have much time in Sarti, as the last bus going back to Metamorfosi left just a few hours later. I headed straight to the beach passing through sleepy Sarti town that had just a few businesses open that time of the year. I loved the first look of the beach as the beach overlooked beautiful Mt. Athos.

I had been surprised to learn that the third finger of Halkidiki peninsula, Mt. Athos, also referred to as Holy Moutain in Greece, is a restricted and special territory. Only adult men are permitted to visit the territory after acquiring a special permit. Mt. Athos is inhabited by a small number of men, members of Eastern Orthodox Church, who are either monks or workers.

Relaxing on Sarti beach, while enjoying the view of this special mountain was a treat. The beach was sandy and pretty long, and it had good waves, making it a good place for surfers. I tried going into the water, but I couldn’t go beyond the waist-deep level due to the temperatures. While returning, I stopped at a local restaurant to have my favorite Greek fast food, gyros on a pita bread.

Then I was on my way back, once again enjoying the beautiful peninsula views from the bus.

Nikiti is one of the more popular towns in Halkidiki, famous for its preserved old town that sits a top of hill and the long sandy beaches in the area, considered some of the best on the entire peninsula. I visited Nikiti a couple of times, as it was the nearest town from my village. I enjoyed strolling in the old town, which was quiet and beautiful, and free from any tourists! All I saw were locals.

The main beach in Nikiti had many beachfront hotels and restaurants, but the beach itself was sandy and calm with clear blue waters.  I wanted to dive in the area, so Nikiti is also where I found a nice dive center. I was taken to a beautiful beach not far from Nikiti, where I saw plenty of fish and plants underwater.

I spent the rest of my time in Nikiti sunbathing and reading on an elevated concrete structure near the main beach from where local kids jumped into the blue inviting waters. I finally took a plunge myself and it was so relaxing! After a cloudy morning, the sun came out in the afternoon bringing out the brilliant blues of the sea, and it was simply irresistible to not jump into the water.

Nikiti beach was more happening than the beach at the village where I was staying it, so I definitely enjoyed the buzz when I visited.

Porto Koufo was perhaps the most interesting town I visited in Sithonia.  Porto Koufo is the largest natural harbor in whole of Greece. The main beach in this fishing village is almost entirely enclosed in a bay that gives more of an impression of a mountain lake. The sand is soft, the water is blue and gets deep very quickly.

It is a good place for throwing in your fishing line as fishing is very popular in the village. I found the village to be quiet with only a few hotels near the beach. The beach is quite narrow, but the views of the mountain across the water make it very scenic and distinct. I enjoyed lying down on the sparsely populated beach while enjoying my book and the beautiful views around me.

The bus stop was very close Porto Koufo beach, but I wanted to see more beaches in the area. There was one about 3 kms away from the harbor, so I started hiking on the hot sun towards the relatively isolated beach named Marathias. The dirt road to the beach took me through vast olive plantations with nobody in sight except some occasional birds.

I used offline Google map to track the way, and during the whole hike, I felt like I was the only person in the area. As I got closer to the beach, I could see a few houses, some horses and a car. I don’t mind being by myself but I do enjoy having people around, so I was glad that I could finally see someone after an hour of seeing nobody.

The beach was absolutely empty, and it was gorgeous! Like a little slice of paradise that nobody knew of. I spent some time just reading and lying on the beach when I saw a couple come and snorkel. I didn’t dare to go to the water, as it was just too cold for me. The couple left soon after to one of the few houses in the area I assume, and I was alone again with the whole beach to myself.

I enjoyed the walk back to Porto Koufo beach, and made several photo stops along the way as I was surrounded by beautiful nature on a bright, sunny afternoon. After I arrived at Porto Koufo beach, I went to the other side of the bay and enjoyed a cold drink.  Soon after it was time to head back and catch the bus going to Metamorfosi.

On my way back, I had to make an unexpected long walk back the village.  I had noticed that the buses always had a driver and a conductor who collected fares and announced the bus stops. As it was the last bus that went back, the conductor apparently got off in one of the towns before my stop, so the bus drove straight without making a stop (which was a slight detour through the village) in Metamorfosi. Luckily I was checking the maps all the time, otherwise I’d have realized it too late. I went to the driver and asked him why he didn’t stop at Metamorfosi, but he told me that he thought there was nobody getting off there 🤷 He stopped in the middle of the highway and I had to get off there. The worst part was walking on flip-flops on a highway that had no sidewalks! After about forty minutes of walking, I reached my apartment. Frustrating at the time, but just a funny memory now.

My stay in Halkidiki was full of exploring, relaxing and enjoying the pretty beaches and blossoms of late spring. I look forward to going back there again, but definitely with a rental car and company! 😀

22 thoughts on “Exploring the beach towns of Sithonia, Halkidiki” 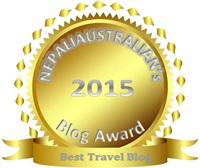