Note that this blog post is available on GPSmyCity as a travel article in the Colombo city section. The article can be downloaded by clicking here. You can also subscribe to or upgrade the article (for a small fee) for gaining access to the offline map with all sights mentioned on the article.

We arrived in Colombo the night before our departure by an express, air-conditioned bus from Matara, near Mirissa. The journey took only 4 hours or so and the new highway was quite nice and smooth. What I found most amusing was of course the big info boards telling drivers to be aware of peacocks. Wow! I didn’t see any though.

We arrived in Colombo at around 8 or 9 in the evening and were tired by then. The city quite reminded me of Kathmandu. We took a tuk-tuk and went to our friendly host’s apartment. Later we went to a nearby restaurant where I was helped by the locals there with the language as the restaurant people didn’t speak any English.  One man started chatting up with us and seemed intrigued. He turned out to be quite friendly, such a change from people in touristic areas that we had met who were only after money.

On the next morning, we packed our stuff and went straight to Fort Railway Station. Our plan was to drop our bags in their locker room, do sightseeing for the day and go to the airport for our departure to Poland at about 9 in the evening. It was already very hot and humid at 9 in the morning. The lockers were old-fashioned but reliable (so I read and was told and experienced) so we left everything except electronics, cash and travel documents in our backpacks and went off for sightseeing.

I had a couple of places in mind, but within 5-10 minutes of walking, the heat started wearing me out. We just walked toward the center of the city where they have all the high-rise buildings, banks, government offices in the ocean-front area. I had read about a scam of a mid-aged man in Colombo coming up and talking to tourists only to scam them into getting in a tuk-tuk to a nearby temple celebration or something to overcharge/loot them. A mid-aged man appeared in the district as we were walking, started talking with my boyfriend, introducing himself as a sailor but I immediately caught on and told my oblivious boyfriend in Polish that the man was a con artist whom I had read about on the internet. Spending hours on internet reading about all kinds of things does pay off sometimes!

The commercial district in Colombo was quite impressive. Google tells me that the place is called Galle Face Green. We have nothing of that sort in Kathmandu, that is: clean wide streets, high rise buildings and proper traffic lights. Colombo looked way ahead on the development game. We just walked and walked and walked, and cancelled our initial plans of going to major tourist attractions of the city. I however really wanted to go to a few, including Seema Malaka Buddhist temple, an impressive looking Hindu temple and Pettah Bazaar. So we walked, passed several neighborhoods, stopped in air-conditioned cafes for cold fruit smoothies and so on. It was a nice day. 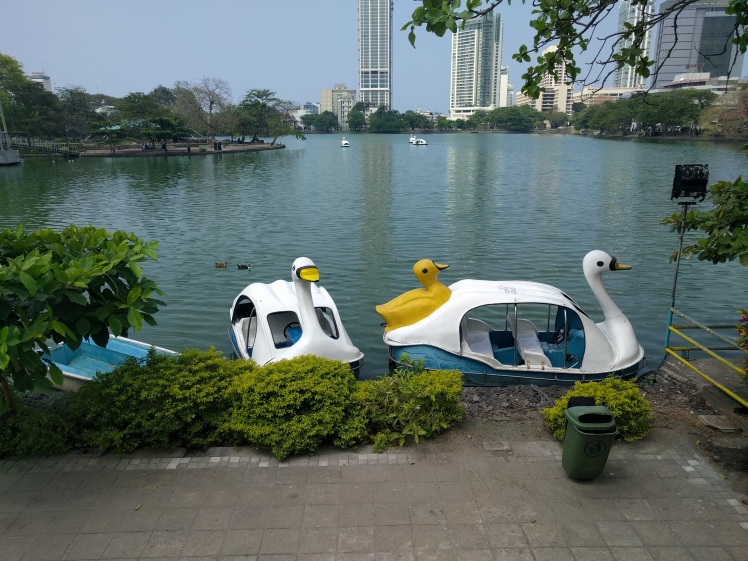 The temples were nice. The Hindu temple was not similar to Nepali Hindu temples and the Buddhist temple was not similar to Nepali Buddhist temples, so it was interesting for me to notice the differences. We even spent half an hour boating in a green pond where Seema Malaka temple is. It was quiet and pleasant and since the boats were swan shaped (with a roof and all), we escaped the heat for sometime at least.

By the time we got to the Pettah Bazaar, that was right next to Fort Railway Station where our backpacks were, we were exhausted. The bazaar was itself nothing interesting, just a huge marketplace where they sold all kinds of things. I took my boyfriend to a dessert shop and he tasted some Indian desserts that he never had before. We didn’t have any lunch because walking all day in 30+ (humid) temperature sabotages your energy and appetite. I bought some Maggi noodles and spices for Poland at a nearby grocery store and after that we decided to head to the airport. Earlier than we had planned, but we didn’t want to do more sightseeing.

The journey back to the airport by public bus took about an hour. I was both happy and sad about leaving: sad because no more beaches and exotic fruits everyday and happy because back to the comfort zone and the orderliness of Europe. The journey back was long and uneventful and we finally arrived back in Lodz nearly 2 days after departing from Sri Lanka, full of beautiful memories and stories from the exotic island nation.